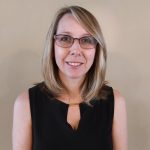 Originally from Ukraine, Olga grew up in a musical environment with her mother and father teaching accordion and piano. After finishing music school, she decided to pursue a career as a pianist. Olga completed studies at Lviv Music College, obtaining an Artist-Teacher Diploma with Honors. Later she obtained her Master’s degree in piano performance from Lysenko Conservatory of Music in Lviv, Ukraine.

In 1995, after winning the Toronto Lyudkevych Competition and receiving a scholarship, Olga moved to Canada. During this time, Olga performed in chamber ensembles and as a soloist, and accompanied singers, violinists and cellists. Olga worked as a piano teacher at the Robert’s Center for the Performing Arts in Richmond Hill and accompanist for the Vesnivka Choir, TrypTych Productions, Toronto and the International School for Musical Arts.

She has participated in numerous master classes with well-known pianists Alexander Slobodyanik and Mykola Suk, among others. From 2003- 2011 Olga taught at the Bermuda School of Music. She performed as an accompanist for the Bermuda Music Festival and Bermuda Festival Orchestra.

She has studied the Suzuki pedagogy with Carol Bigler and Jane Kutcher in Kingston, Ontario, receiving certification on Book 1 & 2. Also, Olga is an organist at Faith Church in Fergus.

Olga has been teaching for more than 20 years. She enjoys working with students of all levels.