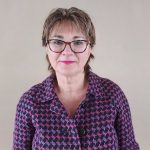 Margaret is Assistant Concert Master with the Guelph Symphony Orchestra, a founding member since its beginnings 18 years ago, and a principle violin with the University of Guelph Choir and chamber orchestra. Four of Margaret’s students have won gold medals from the Royal Conservatory of Music, while seven have won silver medals. Educated as a musician and teacher, she was a professional violinist and pianist in both Poland and continues to be in Canada. She has a Masters in the Musical Arts and Pedagogy with a specialization in the violin and piano from the University of Wroclaw, Poland.

During her time in Europe, Margaret successfully trained students for admission to the prestigious Warsaw University, and many of them have since become prize winners in Polish national music competitions. She teaches all classes, ages and theory. Over the years, Margaret has worked professionally with various orchestras in Poland, Switzerland, Germany, and Russia.

Since arriving in Canada in 1996, she has developed professional associations involving local musicians, playing with quartets, and with the GSO and the University of Guelph Choir and chamber orchestra. She teaches the violin and piano to students of all ages at the Guelph School of Music since its founding in 1997. Four of Margaret’s students are recipients of gold medals from the Royal Conservatory of Music, three for the violin – with the most recent in 2018, and one in piano in 2015. Seven of Margaret’s students are also recipients of the Royal Conservatory of Music silver medals.

Besides music and musical education, she has traveled extensively through Europe and the Middle East during her summers, and enjoys nordic skiing during winters. Her teaching philosophy involves a living relationship of give-and-take, and of mutual support and learning. To Margaret, music is an amazing blend of discipline and imagination brought to life by the strings of the violin and the keys of the piano.

Margaret’s passion for music and dedication to teaching are an inspiration to all who know her. As a teacher, her students have been prize winners in many Polish national competitions. She is also the former member of the acclaimed European Chamber Orchestra. Currently, she is Assistant Concert Master in the GSO, was recently a member of the Kitchener Waterloo Chamber Orchestra and the Toronto Symphony Orchestra of Nations, and is now a principle violin at the University of Guelph Choir and chamber orchestra.